Our December meeting was held via Zoom. This enabled members from outside of Laramie to easily join in the conversation. We would like to continue offering this option going forward.

This season we will have 4 signs on the Snowy Range.  Two signs will go in at the main Y of Brooklyn Lake Rd and WY-130 and one above Albany Lodge. The fourth sign will go on 130 just after the Chain’s End parking area. State Trails has one to go to the Sierra Madres. If any members ever find a sign not working, email us or send a Facebook message and we’ll get on it.

Forest’s State Trails update: Trails Program Manager. Season started slow this year, but got 30”two nights ago (trail crew reported) and trail grooming started right up. WY-130 is all dry, no snow on it, not groomed. Quealy safety shelter is going in on Monday December 21st, Nelson Park goes in soon after. Staking of trails is occurring as there’s enough snow to do so. All trail junction signs are up. Top of T-trail before the trees is pretty bare. South part of the forest(Mullen Fire): it was tough to get USFS to allow the State Trails in and replace permanent signs, but they’ve been at it for ~3 weeks via chained up trucks and snowmobiles, and to cut out roads/trails.

WSSA scholarship applications are coming up soon for those members that are attending post-secondary education. Otherwise no new update from WSSA. Reach out if you want details on WSSA scholarships, pretty easy money for education!

ACSA (American Council of Snowmobile Assocations) calendars for $20. Can win up to $360,and then $500 goes back to the club that sold the winning calendar/raffle. Cameron will have some of these at the 3C Guiding shop for sale.

Next Meeting: January 21, Zoom info will be sent via email and posted on Facebook.

Hope this email finds everyone well and ready to start thinking about snowmobiling again.  Our first meeting of the year will be this Thursday September 12th.  We will be returning to Firehouse #3 in West Laramie.  The meeting will start at 6 and we have several things to get scheduled and discuss.  Below is a list of some items for discussion.  If you can not make the meeting and would like to add any comments please reply to this email and we will be sure to add those to the discussion on Thursday.

Scheduling:
Fall highway cleanup
Nelson Hut wood
Quealey Hut wood
Nelson hut repair
Discussion:
Snow Show
Beacon Checkpoint signs
WSSA update
Parking update
State Trails Update
Sponsors
We will be trying to schedule most of the work items between now and the middle of October.  Most items should only take half a day.  The hut is in Laramie so repairs will be easier for that.  the Highway is looking real good so we can focus a little bit further off the road and both huts have a good amount of wood at them so everything we will be cutting will be making sure we are good and getting ahead. If you would like to help with any of these and can not make the meeting, again reply to this email of when you are available to help and that will aid in choosing dates.
Hope to see you there!

We have rescheduled the February Club Meeting for Wednesday, February 27th at 6:30 pm. We will meet at the Laramie Plains Civic Center, in the Conference Room. The address is: 710 East Garfield Street, Suite 110, Laramie, WY 82070. We hope you can make it!

Quick reminder we’ll have our January meeting this week on Wednesday night (1/16) at 6:00pm.  Hope you can make it, but we realize many of you are located elsewhere or busy.

Location: Laramie Fire Station #2, 1558 N. 23rd Street, Laramie, WY.
Also a reminder for those of you seeking post secondary education (or kids headed that way), the Wyoming State Snowmobile Association scholarship applications are due by February 1st to Shannon over at WSSA. See the attachment for details.

Hopefully you’ve gotten a chance to get up on the mountain and enjoy this strong start to the year! Keep the snow dances going!
The trails are in and the safety shelters went out on Wednesday night. We’ll be working to get the beacon check stations in this weekend: one at the Brooklyn Lake turnoff near the GreenRock trailhead [junction of U & O trail] and the other on the West side at the Chains End parking lot. We encourage you to make a quick stop and check that your beacon is transmitting correctly using these convenient check stations this season. Big thank you to Front Range Powersports, TNT Motorsports, and Frontier Cycles for the partnerships to provide these!
This month’s meeting will be next Wednesday evening at 6:30 pm, at Laramie Fire Station #2: 1558 N. 23rd Street, Laramie. We hope to see you there.
The parking situation on the southern end of the Range has been resolved, with a plowing contract filled for the Tic’s parking lot [off Wyoming Highway 230, between Foxpark & WyColo Lodge] for the ’18/’19 winter season. I’ve driven by twice and each time the lot was open and cleared, ready for easy trail access.
For those of you venturing north toward the Bighorn Mountains this season, Jeremy Bock at Z Bar Cabins & Motel in Buffalo, WY has graciously extended a 30% discount offer to all of our club members. You can check them out here or give them a call at: (307)-684-5535, just be sure to tell them you’re a Snowy Range Snowmobile Club member for the discount.

We hope that the summer served everyone well and I know that we are all ready for the snow to start piling up.  When this time of year rolls around its time to start making sure that the warming huts are ready to go and that the wood supplies at each location are adequately stocked.
This year we will do hut maintenance on the mountain. The huts are located up above Rob Roy Reservoir.  We need to try to get one more year out of the floors so we will be cleaning the hut top to bottom prepping the floor and painting them like we did 2 years ago.  First date of this will be Sunday September 16th.  We may be able to get them both completed but if not we will reserve the following Sunday also.  If the turn out for this is very good we can split into 2 groups and the second group can travel to the Nelson Hut area and cut firewood.  If you are available for either the 16th or the 23rd of September please let us know either by email or on FaceBook.
We will get to the Quealy hut area either the last weekend in September or the 2nd weekend in October and we can do that either Saturday or Sunday based on volunteers.
This year due to scheduling conflicts with where we have the meetings most of the meetings will be held on the 3rd Wednesday Evening of the Month.  Please see schedule below.
Thursday September 27th @ Fire House #2  1558 N. 23rd in Laramie
First meeting of the season we will elect new officers (we need a Secretary/ Treasurer but all offices are open for replacement if need be) we will also make sure that we get any unfinished hut activities scheduled.
Thursday October 18th @ Fire House # 3   2374 Jefferson St in Laramie
No Meeting in November
Starting in December thru April we will meet the 3rd Wednesday of the month @ Fire House #3
All meeting will start at 6:30 and we will try to wrap up in about an hour.
Any questions or to help out with this falls activities please respond to this email and if you or someone you know is interested in an officer position with the Club please let us know also.
Thanks,

We will have elections and look at dates for highway clean ups and summer activities.
We are looking for someone to take over the Secretary/Treasurer position. If you are interested or have questions, please let us know!
We hope to see you all there!
Our January meeting will be Thursday, January 18th at Laramie Fire Station #3, 2374 W Jefferson St. Dinner will start at 6:00pm, with the meeting starting at 6:30pm.

In light of recent events on the Snowy Range, we thought it would be a good idea to invite the Albany County Sheriff’s Search & Rescue to come visit with us about how we can best help when an event occurs and to inform folks on how to get involved with SAR. This will be our normal club meeting but is open to anyone and everyone–the more we can educate everyone, the better prepared our community to deal with an emergency. Please join us on Feb. 15 at Laramie Fire Station #3 at 2374 W Jefferson St at 6:00 pm.

If you have any questions please let us know. Hope to see you all there!

It’s the time of year to start having monthly meetings again. Our first meeting will be held on Thursday, October 26th at 7:00pm. All upcoming meetings will be held on the 3rd Thursday of every month.

This year we will have a change of location. We will now be meeting at Laramie Fire Station #3 in West Laramie. The change of location allows us more options and the ability to bring food and non-alcoholic drinks to our meetings. 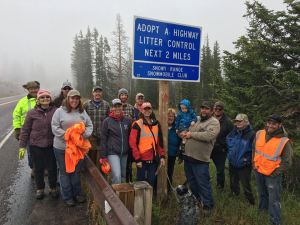 We had a great turn out for the Quealy wood cutting and highway cleanup. We had 20 people show up to brave the fog, rain, and snow. We would like to say a special thank you to the 6 members of the Colorado Blizzards Snowmobile Club who traveled all the way up from Colorado to help us.

The Nelson wood cutting will be on Saturday, October 14th. We will be meeting at the West Laramie McDonalds at 9:00 am and heading up the mountain shortly thereafter. Please bring chainsaws, axes, and splitting mauls if you have them. The club will provide a hot lunch and water.

If you have any questions, please contact us. We hope to have another great turn out!

The location could not be found.